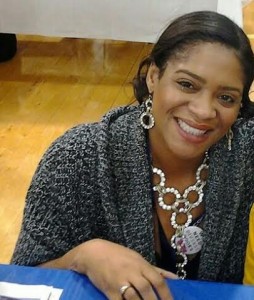 At Jubilee! Community Church, we loosely follow the tenets of Creation Spirituality as put forth by Matthew Fox. During the winter, we celebrate Via Creativa. It’s a time to honor our sacred energy, to nourish our imaginative spirit, and to birth our own unique expression of the Holy. I recently met Felicia Capers when I wrote a review of her children’s book Enough of Frankie Already!, and I’m pleased to share my blog space with her today. Her personal story is a wonderful testament to that divine, creative spark that lives within each of us.

DIVINELY ORCHESTRATED: HOW MY CREATIVITY SAVED ME

It is said that through our darkest hours, come the most amazing things. My pastor puts it this way. A woman labors for hours and hours on end, subjected to odd body positions to aid delivery coupled with intolerable pain while experiencing the sights and smells of fluids that she never knew her body could hold. However, the moment she lays eyes on her beautiful creation, all the unbearable moments seem to leave her consciousness immediately. I read a story recently about the pains of a grain of sand as it transforms into a priceless pearl in the womb of an oyster. It’s rocked by the ocean. It thinks itself lost in the belly of some beast not knowing its glorious purpose is on its way. There goes the world in which we live. It is those deeply touching and nearly catastrophic experiences that should, and often do, propel us into destiny, fullness of life, and our God-given purpose. Let me share my own story with you. It’s the story of the hand of God stirring up my creative gifts.

As a very young teen I recall helping my mother write a winning essay for a supervisor’s position with the United States Postal Service. I wasn’t aware of my way with words back then until a teacher encouraged me to audition for an arts high school for Creative Writing. I wrote a few great pieces of work and was accepted, but I still didn’t yet realize I had the gift.  I participated in countless writer’s workshops, committee workgroups, and even a paid writing job while still in high school.  The capstone was a very exclusive young writer’s weekend at Syracuse’s renowned Newhouse School of Public Communications. After that amazing experience, I was certain I had the juice. Years later throughout the happy days of my marriage, the gift began to stir some more. Ideas literally flowed from everywhere and I’d sit at a computer with my son on my lap and brainstorm and type and research for hours.  I researched the business of writing and publishing and spent good money traveling to workshops for hands-on training with professionals. I developed these amazing fictional characters whose personalities deepened as their chaotic lives intertwined over the ensuing days. Things were moving forward in my first career, and writing as a hobby was beginning to take shape as a second career. What more could I ask for?

And then came the train wreck that almost completely derailed me – my divorce. I was devastated by the disaster that struck my home. After the initial shock, pain, and anger came the depression. With depression came feelings of failure and unworthiness. Why was this happening to me? What could I have done differently? What was wrong with me? The self-loathing was cyclical, and I was a mess. I packed up my computer, stopped answering phone calls from my fellow writing colleagues, and crawled into my cocoon of misery.

The messages to myself were clear and not very pretty. Failure. Worthless. Not good enough. Talentless. The messages from God were distant and confusing. What was He telling me? Why would He lay the foundation for things to move forward and hit me with such a blow? Why was He allowing my professional situation to take shape at just the same time that my marriage was falling apart? I couldn’t understand, and it made me angry. I recall sitting quietly at the edge of my bed, knees shaking, with tears streaming down my face. I turned around and postured to pray, so angry with God. What was wrong with me? Why were my nerves so tense? What did God want from me now? Was I meant to feel this separated from Divine Orchestration? If so, mission accomplished. Broken. Battered. Bruised. I knew I needed to break free of my self-defeating attitude, but so much restoration was needed.

And then I felt the itch. I can’t describe this feeling any other way. It sounds weird, I know, but it was an annoying itch deep inside that moved quickly. It was a longing to get back to the person I knew I was meant to be all along. It didn’t happen overnight. There was a long process full of varied supports and setbacks, and the very last thing that would be restored was my confidence in me. But the itch was there.

I realized that I was a writer, but even more importantly, I rediscovered that I was a creator. I was a creator of characters. I was a creator of conflict. I was a creator of plots, storylines, business plans, and book ideas. I was full of them, and they were ready to be birthed! I literally began to feel that if I didn’t create, I would die.  You see, creation, my creation, meant I was worth something and that I had purpose again. It meant I was nobody’s failure! I took out that old laptop I’d put away years ago and blew the dust off. I rehashed all my plans to publish. I read through every manuscript I had ever written and snuggled up close to them like they were already full length movies. I even wrote two more manuscripts during that time.

And then the light bulb flashed. My career in child welfare offered a host of children and families and professionals that could serve as my present audience! I decided that if I were going to CREATE something using my God-given gifts, and do so like my life literally depended on it, then I would do so in a way that logically made sense. I decided to marry again, but this time I would officiate the marriage of my two loves – children and writing. I became a children’s author.

It was a long, messy cankerous process to manage the lost, reorganize my life, refocus my energies and finally get back to me. But if there is one lesson I could take from that time, it would be that our Creator knows our life’s mission before we are born. The doors and opportunities to express my creativity have literally flown open for me, and God knows the right season to proceed with each plan. Despite what I had once felt about myself, I am convinced that my creative reawakening was God’s response to my pain in His language. Could it be, I often ask myself, that the interruption in my process, the devastating intermission that led me off track for a bit, the agonizing ordeal that felt so bad, was actually Divinely orchestrated for my good? Most importantly, could it be that the agonies you face in the belly of your oyster at this very moment are all orchestrated to propel you toward your creative destiny too?