This weekend is St. Patrick’s Day. Officially known as the Feast Day of St. Patrick, the patron saint of Ireland, it has become quite the cultural holiday, with a huge percentage of Americans deciding they really are Irish after all — at least for one day.

While many people associate saintly feast days with the Catholic Church, other religions also have saintly traditions. In honor of Women’s History Month, we’ll spend this week highlighting female saints, and we’ll start with Hinduism.

There is no formal, centrally-organized method for canonizing Hindu saints, but over time, many men and women have achieved saintly status. Here are two examples. 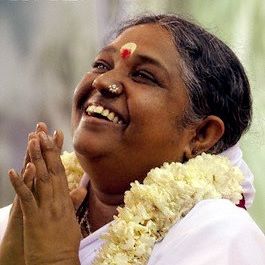 Sri Mata Amritanandamayi Devi
Mata Amritanandamayi is known around the world as Amma (mother) and as “the hugging saint.” It is estimated that, during the course of her life, she has embraced and comforted over 34 million people! At a very young age, Amma was moved by the profound poverty she saw in her village in Kerala, a state in southern India. She regularly shared food and clothing with those in need; soon, she was embracing those who needed comfort. Since teenage girls were not allowed to touch others, especially men, Amma’s spontaneous displays of love and compassion were not always well-regarded, even by her family. As she has said, “A continuous stream of love flows from me to all of creation. This is my inborn nature. The duty of a doctor is to treat patients. In the same way, my duty is to console those who are suffering.”

She has established a global network of charitable organizations, called Embracing the World, that offers services in over 40 countries. Her work on behalf of women and children is particularly impressive. Christian saints are all dead. After all, you need two verifiable post-mortem miracles to become a Catholic saint. But some Hindu saints are alive and well, which means you can meet them in person. In fact, Amma’s 2018 North American tour dates will be revealed soon.

Mirabai
Going back a few hundred years, we have Mirabai, also known as Meera Bai. She was born in the northwest Indian state of Rajasthan in the 1500’s and became an integral part of Hinduism’s Bhakti movement. As a child, Mirabai became completely devoted to Lord Krishna, spending much of her time just adoring her Krishna idol — bathing it, dressing it, dancing with it, sleeping with it, singing to it, and worshiping it. As a young woman, Mirabai married, but her husband was killed in one of the many Hindu-Muslim wars in the early 1500’s. Mirabai’s in-laws were not pleased when she joined the family, so they tried to kill her with a cup of poison (offered as nectar) and then a deadly cobra (instead of flowers) hidden in a basket.

Like the Christian saints, it’s nearly impossible to verify the numerous and varied legends associated with her. This is largely because her story emerged over time — probably by many people pursuing various agendas — long after her death. We do know that she composed hundreds (but probably not thousands) of lyrical, free-form devotional song/poems known as bhajans in honor of Lord Krishna. Some of them are still sung today in the Mirabai Temple on the grounds of Chittorgarh Fort, which is a popular tourist destination and pilgrimage site.

Click here to learn more about Hindu gurus and saints (male and female). And stay tuned for our post tomorrow on two amazing female saints in the Christian tradition.