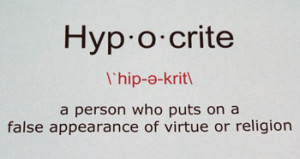 No one likes a hypocrite. Even Jesus goes on a bit of a tirade about it according to the Gospel of Matthew. As it turns out, other religions aren’t big fans of hypocrisy either, which makes sense considering that some definitions focus specifically on being disingenuous about religion. As with all of our Bible Unbound columns, we’ll start with the Bible and go from there. Here are a couple of those passages from Matthew.

“So whenever you give alms, do not sound a trumpet before you, as the hypocrites do in the synagogues and in the streets, so that they may be praised by others. Truly I tell you, they have received their reward. But when you give alms, do not let your left hand know what your right hand is doing, so that your alms may be done in secret; and your Father who sees in secret will reward you.”

“And whenever you pray, do not be like the hypocrites; for they love to stand and pray in the synagogues and at the street corners, so that they may be seen by others. Truly I tell you, they have received their reward.” (Matthew 6:2-5)

Matthew 23 contains a rather long diatribe against the “scribes and Pharisees” for their hypocritical ways. Here is a portion of it, but feel free to read the entire chapter on your own if it’s been a while.

“Woe to you, scribes and Pharisees, hypocrites! For you tithe mint, dill, and cumin, and have neglected the weightier matters of the law: justice and mercy and faith. It is these you ought to have practiced without neglecting the others. You blind guides! You strain out a gnat but swallow a camel!

I have no idea if the scribes and Pharisees deserved this condemnation, but denouncing hypocrisy is certainly a very old past-time in the religion business. Even Jesus quoted the ancient words of Isaiah when he said, “You hypocrites! Isaiah prophesied rightly about you when he said: ‘This people honors me with their lips, but their hearts are far from me; in vain do they worship me, teaching human precepts as doctrines.’” (Matthew 15:7-9)

As I’ve already mentioned, other religions don’t appreciate hypocrisy either. We’ll start with the Bhagavad Gita, which may have been written as early as the 4th century BCE. The Bhagavad Gita is a dialogue between Prince Arjuna and his guide, the deity Lord Krishna. In this particular chapter, Krishna is trying to describe the dichotomies between that which is divine and that which is demonic. Hypocrisy is not part of the divine.

Other qualities, Arjuna, make a person more and more inhuman: hypocrisy, arrogance, conceit, anger, cruelty, ignorance….The demonic do things they should avoid and avoid the things they should do….Hypocritical, proud, arrogant, living in delusion, and clinging to deluded ideas, insatiable in their desires, they pursue their unclean ends. (Bhagavad Gita, Easwaran, 16:4,7a,10)

Another, slightly different translation, uses the word “pseudo-religiosity” to get at the same idea.

Pseudo-religiosity, pretentious pride, conceitful arrogance, anger, harshness and ignorance arise in one born of the demonic nature, O Arjuna….Persons of demoniac nature cannot understand actions in their best spiritual interests and actions in their worst spiritual interests; there is never purity, nor good conduct, nor even truth in them. (Bhagavad Gita, web, 16:4,7)

The Tao Te Ching similarly suggests that hypocrisy is not associated with “the Way.” James Legge’s translation (published in the 19th century) is one of the few that actually uses the word “hypocrisy,” but the same idea emerges from other translations.

When the Great Tao (Way or Method) ceased to be observed, benevolence and righteousness came into vogue. (Then) appeared wisdom and shrewdness, and there ensued great hypocrisy. When harmony no longer prevailed throughout the six kinships, filial sons found their manifestation; when the states and clans fell into disorder, loyal ministers appeared. (Tao Te Ching, Legge, chapter 18)

When the way of the Tao is forgotten, kindness and ethics need to be taught; men learn to pretend to be wise and good. All too often in the lives of men, filial piety and devotion arise only after conflict and strife, just as loyal ministers all too often appear, when people are suppressed. (Tao Te Ching, Rosenthal, chapter 18)

At least one of the Jataka Tales also addresses hypocrisy. These tales reveal the former lives of the Buddha, who is present, in either human or animal form, in each story. Nowadays, the stories exist in a huge variety of forms and formats, but they are great for kids because each story teaches a fundamental life lesson. In this case, the lesson is that one should not be a hypocrite. The basic story goes like this:

Once upon a time, there was a holy man who only looked like a holy man. He was supported by a rich gentleman from the village who built a small temple for the holy man in a nearby forest. The rich gentleman also buried his family fortune near the temple, asking the holy man to guard it. Of course, it didn’t take long for the insincere holy man to dig up the treasure and hide it near the roadside, hoping to retrieve it later.

One day, the holy man told the rich gentleman that he wished to leave the village. He claimed that he didn’t want to outstay his welcome or get too attached to the support of the townspeople. The rich gentleman was sad, but granted the holy man’s wish and accompanied him to the village border. They parted ways, but the insincere holy man couldn’t resist the opportunity to convince the rich gentleman, once and for all, that his reverence was genuine. The holy man placed a blade of grass in his hair and returned, apologetic, to the rich man’s home to give it back. The holy man claimed it would be both unwholesome and impure to take something that wasn’t given to him.

I will add just one more ancient text to the list. As you might expect, the Qur’an also warns against hypocrisy. I leave you with this one verse, which brings us full circle since it sounds very similar to the passage in Matthew 6 that we started with.

The Hypocrites – they think they are over-reaching Allah, but He will over-reach them. When they stand up to prayer, they stand without earnestness, to be seen of men, but little do they hold Allah in remembrance. (Qur’an 4:142)

All in all, the message seems pretty clear: don’t be a hypocrite. But you probably already knew that.

[In our Multifaith Mashup columns, we explore a topic from a variety of faith traditions and sacred texts. To see other columns, search our blog using the Multifaith Mashup tag. These columns are representative of the middle school Sunday School curriculum, and to a certain extent, the upper elementary Sunday School curriculum we developed at Jubilee! Community Church in Asheville, NC.]