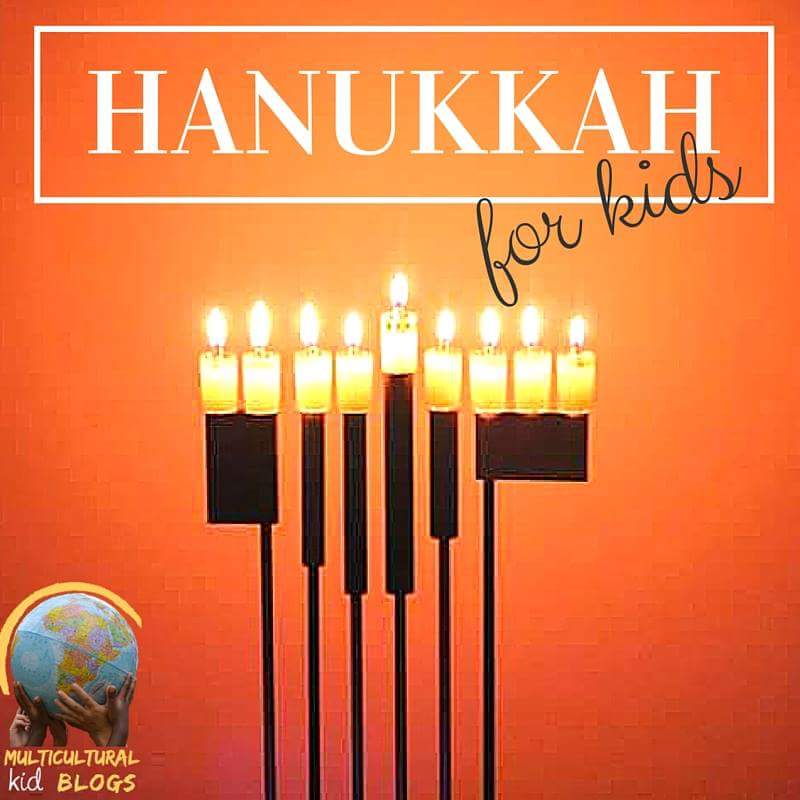 Happy Hanukkah! And many thanks to Multicultural Kid Blogs for letting me be part of this amazing Hanukkah series!

Our theme for this Advent season at Jubilee Community Church is Lights which means we get to teach the kids about the various light-related holidays celebrated around the world at this time of the year — Hanukkah, Solstice, Christmas, and Kwanzaa. I watched a lot of Hanukkah videos over the last few days while creating this Sunday’s lesson plan, so I thought I’d share what I found. There are a lot of videos out there. Here are my picks! Enjoy!

Story
Hanukkah commemorates several important events in Jewish life that occurred during the 2nd century BCE — the successful Maccabean revolt, the rededication of the Temple, the renewed freedom to worship in peace, and the miraculous oil that lasted for eight days. In some ways, it’s a simple story that even young kids can understand. In other ways, it’s quite complex, involving various religious, political, and economic forces of the time. Several videos explain the Hanukkah story. Some simply show someone reading a storybook. The stories are fine, but the videos are a little boring. I also found several videos of modern, fast-paced animated retellings. This one was my favorite. It’s by Jewish Apps. As you might guess, they have a Hanukkah story app., but I thought this video was perfect for a variety of ages. It was upbeat, but not too crazy, and the story manages to be modern without losing site of the overall historical context. [length = 3:09]

Menorah Lighting
One of the primary rituals for Hanukkah is lighting a menorah. Due to the relatively recent popularization of Hanukkah around the world, you can now buy inexpensive menorahs and menorah candles at most big chain stores (Wal-Mart, Target, CVS, Walgreens, etc.). Of course, you are always free to simply stick the candles in the menorah and light them, but you should probably know that this is not what practicing Jews do. One candle, the helper candle, is used to light the remaining eight. The candles are added to the menorah in a certain order and lit in a certain order. It’s not complicated, but there’s a learning curve, and many videos exist to educate you! My favorite video was a very short [length = 1:28] animation. I don’t think you could make lighting a menorah any easier!

Certain prayers are said as the candles are lit. If you’re interested in these prayers, here are some additional links. The first three [about 30 seconds each], from Prayer-eoke by You Tube Rabbi, show the words for the Hanukkah blessings in Hebrew and transliterated (phonetic) English as she chants them. They are absolutely lovely. The downside is that there’s no way to know what the prayers mean. For that, check out the fourth link where Ross Kopelman lights the menorah and recites all three blessings in Hebrew and English. [length = 2:18]

Playing Dreidel
The other widespread Hanukkah practice is playing dreidel, which involves spinning a top that has 4 sides. On each side, there is a Hebrew letter that signifies a word in Hebrew as well as an instruction for the game. Players start by putting small tokens (almost anything can be used) in the center of the circle to create a “pot.” One player spins the dreidel and then follows the instructions — adding a token to the “pot,” taking all the winnings from the “pot,” taking 1/2 the winnings from the “pot,” or nothing. The dreidel is then passed to the next player. It’s a pretty simple game, which makes sense, given that it has been played by Jewish children literally for centuries. But there are ways to make it seem complicated! The best video I found was this one by Howcast [length = 1:51]

Hanukkah Songs
The most obvious Hanukkah song is I Have a Little Dreidel. Because so many people sing it, there are many variations. Here’s one of them:

Various groups have recorded their own versions of the song and their own verses, but most videos get a little repetitive. Listen the first part of this Dreidel song video, and you’ll pick up the tune in no time.

For slightly older children (middle grades and middle school), you really must check out the Maccabeats. They’ve recorded numerous songs where they provide their own words to the tunes of current, popular hits. One of my favorites is a Hanukkah piece called All about that Neis (Miracle) to the tune of All about that Bass by Meghan Trainor. You really have to see it to believe it.

And those are my top picks for Hanukkah videos this year! Thanks for reading and watching!