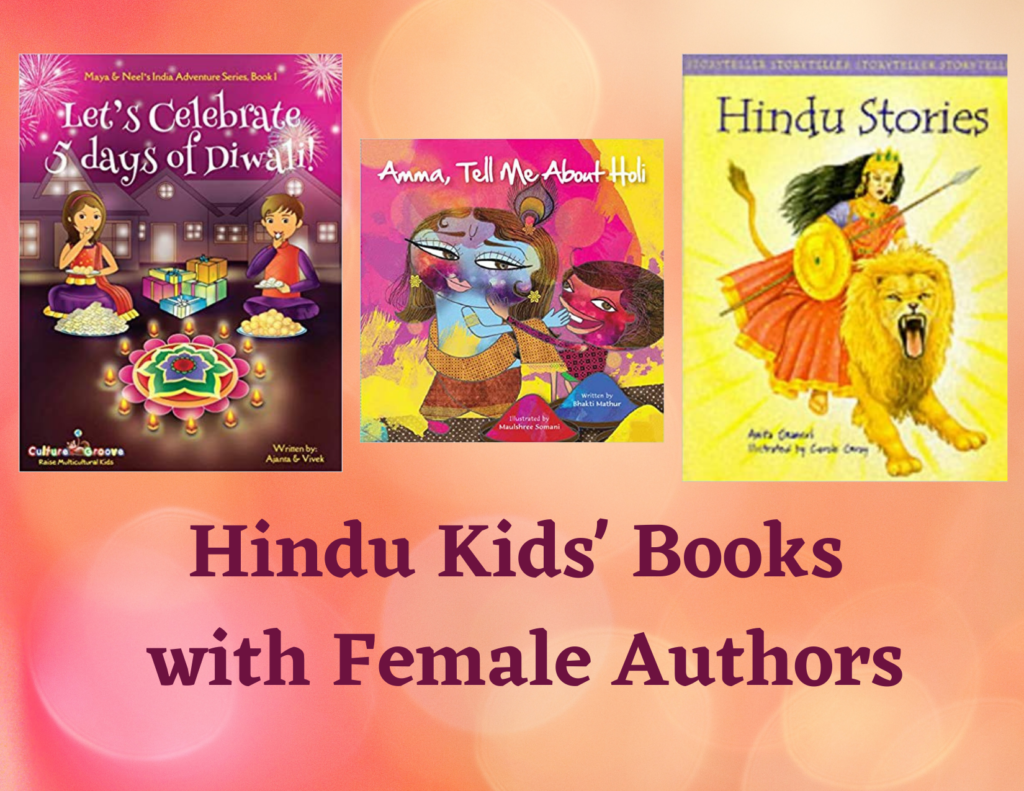 Hindu storybooks generally focus on one of three topics: 1) popular Hindu holidays, 2) various Hindu deities, and 3) tales of the Panchatantra. A decade ago, it was pretty difficult to find good kids books about Hinduism, but that is no longer the case. 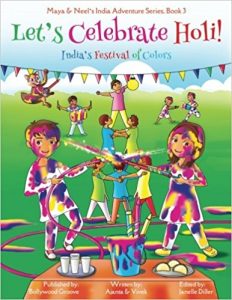 We’ll start with Hindu holidays. For many people, the first two that come to mind are Holi — the spring festival when colored powders are strewn through the air — and Diwali — the fall festival of lights. There are over half-a-dozen books about Holi, and over a dozen books on Diwali, and nearly all of them were authored (and in many cases, illustrated) by women. Ajanta Chakraborty has written a series of holiday books that celebrate the holy days observed in various faith traditions (including Islam and Sikhism) in India. Her Hindu-related books include Let’s Celebrate Holi and Let’s Celebrate 5 Days of Diwali. Bhakti Mathur is another well-known female author of Indian/Hindu books. Her “Amma, Tell Me About” series includes Amma, Tell Me About Holi and Amma, Tell Me About Diwali. Both series are geared to kids in the preschool and lower elementary years. They are informative and fun and keep kids engaged with great illustrations. We also really like The Diwali Gift (3 Curious Monkeys, 2015) by woman author, Shweta Chopra and woman illustrator, Shuchi Mehta.

Deity Stories
The Hindu tradition is also chock full of deities, although what people believe, how they celebrate, and the relative importance of any single deity all vary according to geographical region, school of thought, and preferred religious practices. Many Westerners have at least heard of the Hindu Trimurti of Brahma (Creator), Shiva (Destroyer), and Vishnu (Preserver) and/or the elephant-headed god, Ganesh (Remover of Obstacles). Other legendary deities, like Rama and Krishna, are also somewhat familiar to Westerners. And then there are the various Hindu goddesses, like Lakshmi, Parvarti, Durga, and Kali. All of these characters (and more!) are the heroes and heroines of countless Hindu tales that have been passed down from generation to generation. Recently, they have been turned into colorful books for kids. 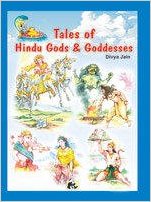 Two of our favorites deity books were penned by Divya Jain, who writes stories in both English and Hindi. Her first book is Incarnations of Lord Vishnu (Unicorn Books, 2009) which tells about Vishnu’s various earthly appearances. In Tales of Hindu Gods and Goddesses (Unicorn Books, 2010), Jain shares a classic story for 10 different Hindu deities. Educational and easy-to-read with color illustrations, Jain does a great job of capturing the magic and mystery of these ancient stories while making them accessible to Western sensibilities. Hindu Stories by Anita Ganeri (auth.) and Carole Gray (illus.) (Evans Brothers Limited, 2006) is also a great option for additional stories about various Hindu beliefs and deities.

Some books focus on a single deity. Krishna is a particularly popular deity with kids because he was a mischievous child, himself. Good books about the legends associated with him include The Magical Adventures of Krishna by woman author Vatsala Sperling (Bear Cub Books, 2009). It has beautiful illustrations, but since it’s really one long story about Krishna’s life, you might need to read it a little at a time for kids. The Fantastic Adventures of Krishna by Demi (Wisdom Tales, 2013), who writes books across the faith traditions, is shorter and could be read to kids in a single sitting.

Tales of the Panchatantra
These tales, whose primary characters are animals with human traits, are part of the Indian indigenous tradition and are probably some of the oldest fables in the world. The tales were passed down orally for generations before migrating across the globe. Over the centuries, they have been translated, edited, and morphed to adapt to the cultural literature of new times and distant places. For example, some scholars think the tales of the Panchatantra served as the basis for Aesop’s fables.

A great collection of tales can be found in The Panchatantra: Wisdom for Today from the Timeless Classic by Sunita Parasuraman (JAICO, 2011). Most of the 52 stories are relatively short (1-4 pages long), but there are no illustrations.

Many of these tales can also be found on line. We really like Top 25 Panchatantra Stories for Kids by Sagari Gongala found on the mega site Mom Junction. All 25 short tales, along with their associated illustrations, are found on a single web page, so it takes a while for it to load. The stories are quite short (just a few paragraphs), however, so you can read several in a single sitting.

Hinduism, as a culture and religion, can be difficult for Westerners to grasp, but these kids stories will give both you, and your children, a great start!

Thanks for reading this week’s series on kids’ books!